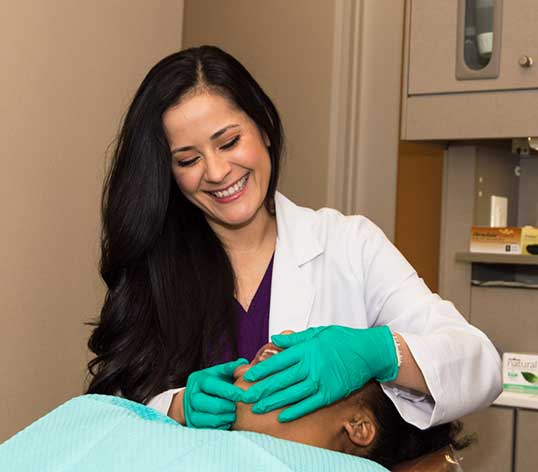 Throughout her life, Dr. Lina Clendennen has put her talent to use and worked diligently to acquire notable academic achievements and honors. However, along with her drive to excel in what she does, she also has a strong desire to help people, and especially those in need.

She grew up in Southern California and graduated from USC in 2011. She graduated fifth in her class from the Texas A&M Baylor College of Dentistry as a DDS Candidate in 2017. She was one of twelve members from her graduating class inducted into the Dental Honor Society and received the W.R. Hammond Trust Scholarship in 2014, an honor where a single dental student throughout Texas is chosen for the award.

Dr. Gonzalez-Clendennen began her career in dentistry working as a dental assistant. She has leadership experience as a tutor and mentor, as an officer in the Texas Association of Women Dentists and as the Ontological Honor Society President from 2016 through 2017.

Her volunteer charitable and missionary work is extensive. She has been involved in working with the Texas Mission of Mercy, performing volunteer dentistry at various underserved communities in Texas. She also participated in the Christian Dental Association Mission Trip to Jamaica where she performed volunteer dentistry for one week. In addition, she was a volunteer in Operation East Texas, helping provide dentistry to a community in that area.

Dr. Gonzalez-Clendennen is also fluent in English and Spanish. She began working with Dr. Baker part time in July of 2017. She was 8 months pregnant when she started and had her first baby, Emmett Wayne, in September. She has since begun working full time at the office. She met her husband while in school and moved to Austin right after graduation, so she thinks she can call herself a Texan by now. They currently live in North Austin.

Why did you become a dentist?

“I truly enjoy what I do. I have a great time getting to know my patients and the details of their lives. It feels great to know I’m in one of the few professions that can find the source of pain and relieve it in a single appointment. In short, it is a privilege to work with Dr Baker and my fantastic patients. I hope to honor that privilege every day.”

“Professionally, I believe in a patient centered practice. My philosophy is to make sure that the patient’s first priority is the same as mine and is addressed as quickly as possible in the course of their treatment. Preventive is best and I do my best to provide as much dental education as I can with every visit. It’s important to me that patients are comfortable with and understand the reasons for any treatment.“

We see patients between the hours of 8 a.m. and 5 p.m., Monday through Friday. We are closed from 1-2 p.m. so that we can be available when most of our patients take lunch. Dr. Baker is also available to treat after-hours dental emergencies.

We Accept All Insurance